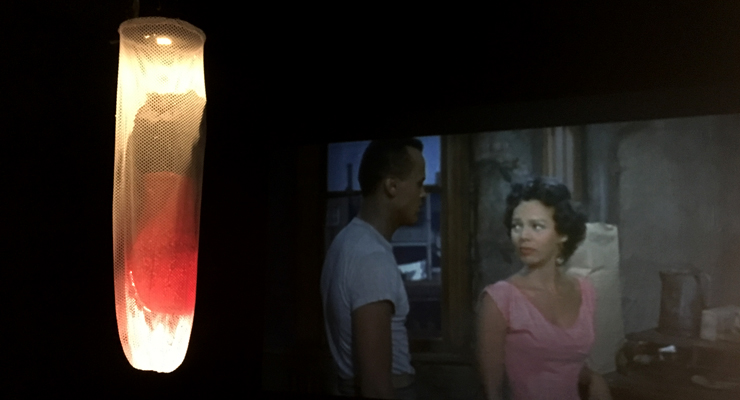 Marielle Plaisir, a French-Caribbean artist based in South Florida has a message in her new multimedia installation opening this weekend at Miami’s Locust Projects.

“Not much has changed in our society in 80 years. degradation, domination and the oppression of African American women’s happiness and success are still alive in 2020.”

On Saturday, Feb. 22, from 7 to 9 p.m, Plaisir’s installation entitled “Acta Est Fabula” (the piece is over) is revealed at Miami’s Locust Projects with a reception to meet the artist. 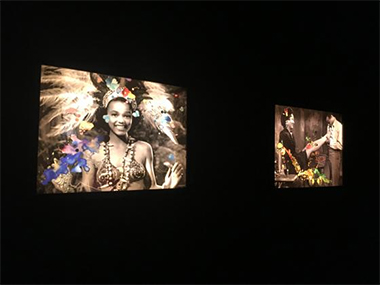 The exhibition features an innovative video wherein Plaisir artfully re-imagines films starring African American actress-temptress Dorothy Dandridge from her 1941 “A Jig in the Jungle” film and her 1954 “Carmen Jones” film. Dandridge was the first African American actress to be nominated for an Academy Award for Best Actress for her role as the flamboyant flirt “Carmen Jones.” In 1955, Dandridge lost to Grace Kelly for the film “The Country Girl” for best actress.

Plaisir’s exhibition message to us, through her use of Dandridge’s on-screen exotic sexuality was as powerful 80 years ago as it is today, the representation of sexy, smart, strong, talented African American women trying to rise.

The artist still has strong hope for the ability and freedom for African American women to succeed through her use of liberated exotic clothing artworks from both of Dandridge’s films.

Her artwork is designed in lace and embroidery illuminated by soft ethereal light and is suspended in the space amidst the projected video.

miamiartzine.com: Tell us about your new exhibit at the Locust Projects and why you call it “Acta Est Fabula.” 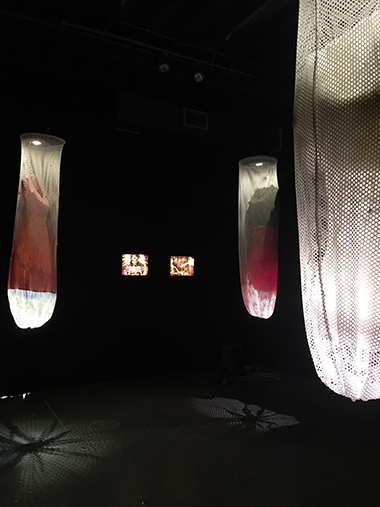 Marielle Plaisir: “Acta est fabula, plaudite!” – “The play is over, applaud!” were the last words of Roman Emperor Caesar Augustus (27 B.C.). That means the play is over, clap: the drama is over, clap. There is nothing more to say. For me, that means we have to finish the chapter to go further. And, denouncing stereotypes from a cinematographic point of view is perfectly in line with the film-video that I composed. For me, this is the end of a chapter which should never open again.

maz: What event or events in your own personal life’s experiences have caused you to base your artwork on the liberation of social domination?

MP: I am a Caribbean, Guadeloupean, French, European artist. It’s a lot. It also means the different levels of domination coming from my identity. I come from a post-colonial island which still suffers in different ways from acts of domination and still suffers from prejudice. I’m trying to understand how identities survive this, while we live in full globalization. How do people who were born in the struggle of power and domination behave? I see above all that new reflexes appear, as a form of resistance or survival. But my observation touches on the universal, on different populations from here and elsewhere. I am very interested in American history and society and I find in the populations of colors reflexes identical to those of the Caribbean population. 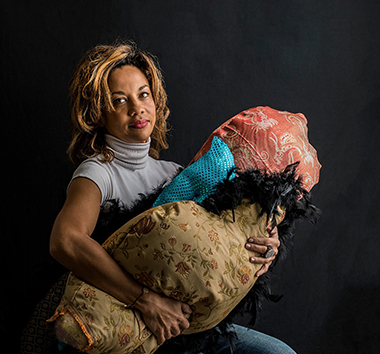 Then, I often say, I’m an activist artist, who fights for equality in every sense of the word. My job is to denounce all forms of domination, of prejudices with different medium. Locust Projects gave me the opportunity to denounce with ACTA ES FABULA’s project!

maz: The year 2020 marks the 100th anniversary of the passage of the 19th Amendment, guaranteeing and protecting women’s constitutional right to vote. What strong message do you have for young women visiting your exhibit?

MP: I think that the place for women in society is not easy and never has been. In our Judeo-Christian societies, women are already categorized as being in the background. Women will always have battles to fight because nothing is taken for granted and she must adapt to societal changes to exist as a person capable of making decisions. Also, the fact of being a woman must immediately be an asset to succeed in your own way and not the reverse. Each young woman simply needs to be convinced that her place in society is essential and that she deserved it.